March 07, 2012
I just laughed for about five straight minutes when I saw this rabbit:
So, IntenseDebate, my irritating but loved comment system, decided to squirrel itself away on my last post and revert to Blogger comments. I hate Blogger comments. HAAAATE. IntenseDebate emails you when people reply, and has threaded comments and this is more akin to what I'm used to from Livejournal (yeah. I still have a livejournal. NOT ASHAMED), so I'm keeping it, but hopefully it won't freak out again.
I bought three books Monday. I know. I KNOW. But they were all really, really awesome. 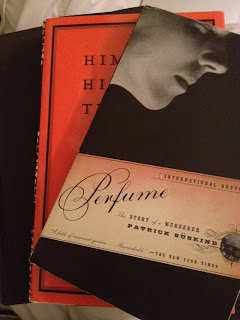 Ok, so Perfume by Patrick Suskind I wasn't going to get because I heard it's gross, BUT it's published by Vintage AND the cover's awesome AND I read the first couple pages and went "Shit, this is well-written." And it was $5, so that's purchase 1. Purchase 2 is Him Her Him Again the End of Him, which was recommended by the now-absent Megs (*stifles sob at her departure for Florida*), because it looks hilarious, and purchase 3 is a seriously, SERIOUSLY kickass copy of Moll Flanders that I got for $7.
No, I know I said I was going to get rid of half of my books by the end of the year, but I totally needed these.
I have a thing about fonts. I don't care in terms of signage, etc, but in books, the font has a serious impact on how I judge what I'm reading. And there's a certain font that was in use during the '30s and '40s that automatically makes me give a book more respect.
Otherly, I finished The Fault in Our Stars and it was ok-not-the-best-thing-ever. Meaning yeah, it's really good, but I'm kind of done with Junoesque teenagers and their quips. I never connected with the characters and I'm really happy to be moving on to Perfume. Yes.