I HAVE BEEN PLACES AND DONE THINGS

March 28, 2012
I HAVE RETURNED. With more books. And having learned a little something about this crazy mess some people call "life."
If you'd seen my face there it would've been a lot funnier.
OKAY. What happened? I went to New York City and
1. Saw an opera at the Met for the second time. The Met is amazing and beautiful and the best opera house in the world. I don't care about ancient European theatres with their incredible ornateness. I love the Met more than all of them. 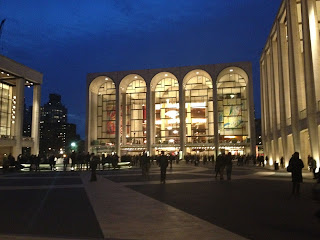 I saw Elixir of Love, which is incredibly silly and fun and starred a German soprano, singing Italian with a Peruvian tenor in America. Did I mention I love opera? I love opera.
2. Saw all the history. I decided to walk around the Battery, and I basically went to every historical thing ever. Meaning the Elizabeth Ann Seton house, the Fraunces Tavern, the Custom House, Federal Hall, Trinity Church, Wall Street, the Bowling Green, the Brooklyn Bridge, and Cannon's Walk. This was the day where I had nothing but half a bottle of ginger ale and 15 gummi bears as of 5 pm. "She says she is an adult, but she is not."
3. Participated in the Triangle Shirtwaist Factory fire remembrance. I can't even try to be funny about this, because there's nothing funny about it. In 1911, 146 people, mostly immigrant women between the ages of 14 and 25, died in a fire on the eighth and ninth floors of a building a block east of Washington Square Park. You know Washington Square. The place Henry James set one of his novels; the place Edith Wharton was intimately familiar with.
The fire broke out on the eighth floor. There were essentially no fire codes at the time, meaning no sprinklers (which had been newly invented), the staircases were too narrow; one of the exits was kept locked; the sewing machines were crammed together, preventing escape; and when some girls found the fire escape and crowded onto it, it collapsed. Many ended up jumping from the ninth floor windows, which is what put this tragedy so much in the public eye and ended up leading to massive labor reforms in New York.
I read about this last year to an almost obsessive degree (I recommend Leon Stein's The Triangle Fire). Walking up to the Asch Building for the first time ever last Friday morning, the main thing that struck me was How Close it was. The ninth floor was so close to the street. I hadn't been right in my guesses from looking at buildings in Chicago. It was horrifying, but I realized you would have been able to see the faces of the girls from the street. There were details from eyewitness accounts that had puzzled me, but when I saw the building in person, I understood.
Being there was important to me, and I met some wonderful people, all of whom are still fighting for better conditions for workers. Along with the 146 white carnations laid down for the Triangle Factory victims, a bundle of red carnations was placed to honor the memory of the workers killed in a garment factory fire in Bangladesh last year. The factory, owned by The Gap, had similarly horrible conditions to those in New York a hundred years ago.
----------------------
There was a lot of crying on the trip. I cried at the Triangle remembrance. I cried at The Hunger Games. And I cried when I went to the Fraunces Tavern and saw some floorboards George Washington might've stepped on.
I saw some plays. I went to a few awesome bookstores, which I'll talk about in another post. And I thoroughly exhausted myself, falling asleep with my contacts in three nights in a row. Chicago, I love you and I will stay with you until I go drinking in Canada this May.