September 04, 2012
PHEW. Labor Day, amirite? So much, you guys. I made Doug of Wuthering Heights fame and Katie from A Writer Must Record the Times watch Blazing Saddles because THEY NEVER HAD BEFORE, only Doug showed up already kind of wasted, so he watched most of it while hanging upside down off the side of my couch. And a good time was had by all. Then Julie from Contractually Obligated to Like Books said we should go to Julius Meinl, and I HAD NEVER BEEN, so we did that and I ate all the Austrian food.
No, seriously, you guys. This was the best: 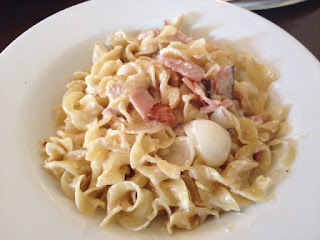 And then Doctor Who happened and I MADE A VID about one of the characters. You know the one I mean. Soufflé girl. THEN there was the White Sox game (for those of you not in Chicago, the Sox are our actually good team) where I had ice cream nachos. Then I bothered everyone on twitter. OH, what a weekend.


I was reading a book called Straight: The Surprisingly Short History of Heterosexuality that I'm going to review later, because I need to think about it, but part of it discusses how the central focus in marriages and relationships has shifted. Meaning it used to be basically a business partnership, because you were way too busy making sure your goats didn't die to worry whether you were feeling as satisfied as you possibly could be with your partner.
But then we got this whole romantic love thing, and everyone for a while was all "SOULMATES HOW WILL I FIND MY SOULMATE" and then people started making fun of that because HAH, soulmates, but were still all "I super-want someone I can fall in love with" (which the author says seems to be a cultural construct, by the way), and that's kind of where we are now. But whereas before we used to be very concerned indeed about finding someone we might feel less than passionately about, but who would be good for the long haul, now it seems to be more "Well, yeah, do they make enough money and are they stable, but MORE IMPORTANTLY, how do they feel about this band I like?"
I guess, is this shift bad? If we try to divorce ourselves from our current cultural doxa (a word she uses many times in the book, and which means a culture's common belief that is so ingrained that everyone 'just knows that's how it is'), despite everyone "knowing" it's important to be in love with the person you're with for the rest of your life, has that served us better? Are we happier as a people because of it? I guess it's difficult to tell since we can't interview any 13th century couples, but damn is our divorce rate high.
Maybe more interestingly, how are our views of relationships shifting now? They've undergone huge changes, probably bigger than in any other time period, in the last hundred years. Interracial marriage has become pretty normalized, gay marriage is becoming more acceptable, and people are becoming less fearful of subgroups like the transgender community. We now have much less of a concrete, black and white definition of what makes a relationship. Which in my opinion is good, because we don't live in a clear-cut, black and white world, and our understanding needs to reflect that.