September 05, 2012
Author events! They are swell. Some of the time. I heartily recommend you go to one, unless it's someone like Jonathan Franzen, 'cause hah, what a tool.

Every author event I've gone to, though, has been spiffy. LAST NIGHT BEING NO EXCEPTION.

So meeting people I'm friends with on the internets is my favorite. I don't know why. People are neat? Sure, that. I've had maybe two not-great experiences out of a billion, but most of them have been like "It's YOU and now I don't have to wait for you to type things because you're right HERE and oh, let's go eat things and talk about television."

I follow Elizabeth Fama's blog, and we occasionally chat on twitter (omg WHY are you not on twitter; it's so much fun), and she reported she was having a book release party at 57th Street Books in Hyde Park for Monstrous Beauty, which is her YA book +about mermaids and Massachusetts. COMPELLING STUFF. Here's the pretty cover, which, although falling prey to the I'm-just-going-to-show-parts-of-a-lady-and-not-her-face syndrome, is STILL really pretty and shiny and I like it muchly:

For those unaware, Hyde Park is south of downtown Chicago, and is a pain in the ass to get to. It's also where the University of Chicago is, full of what I believe would in some circles be termed "over-educated liberals," and is presently kind of in a weird struggle between SUPER-nice houses and fancypants people & the risk of getting shot if you wander into the wrong block. This is all because The Fanciest used to live there, but then you had white flight, people went north, stuff changed, etc. But a lot of Hyde Park is still spiffy, and I fully enjoy going there whenever I can devote a large quantity of time to it (you can take a Metra [read: commuter] train or a very slow bus).
It's got a lot of old, pretty architecture, the university's gorgeous and there are basically 5,000 bookstores per block. Which seems excessive maybe. MAYBE. But it's convenient if you decide not to go in the first five and finally change your mind -- bam! No need to turn around; there's another right there.
Anyway. Book event. 57th Street Books is basically a basement bookstore. Their selection is AWESOME (I'd never been in before), and Katie and I wandered around before the reading/signing/general partying happened. Most of the people there already knew Elizabeth, so it was mostly a "Let's all chat and eat delicious foodstuffs!" sort of thing. OH. Speaking of which: 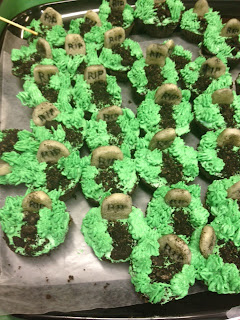 Her daughter made these cupcakes, and if you're wondering if they can be eaten in one bite, I am here to tell you that with a little effort, yes, they can. And they were delicious.


There was a brief Q&A. The two parts which ended up sticking with me were 1) The biology thing, because yeah, lady part up top, fish part on the bottom, how does this work? Ahh, porpoise tail. Mammal. Gotcha. 2) When asked why she liked YA, part of her answer was that it's usually lacking in pretension. YES to that. YA's usually "Hey, I have a nifty idea for a story," and they run with it. Fricking pretension. Of all my favorites, it is the LEAST of them.
I obviously bought the book, because hey, mermaids, pretty cover, it STARTS in the 16th century, and then spends some time in the 19th. Mmmmm 19th. Where people are relatable enough that you kind of get what they're writing, and you also suspect they wouldn't be too smelly if you met them in person (yeah, I don't think so, Shakespeare -- stand over there, stinky). So she signed it, and can I just say, Katie are I were basically overwhelmed by her adorableness. For she is tiny and so cheery. Basically, if you get the chance to meet her, do so.


Internets, why haven't we met? Just come over to my apartment; I'll get some crackers at Trader Joe's and we'll watch movies from the '80s. And maybe make fun of 19th c. poetess Felicia Hemans and her over-use of exclamation points.

We haven't had GIFs here in a while. My apologies. Here's a yawning baby duck: