The Lifted Veil, aka George's Early Writing and Not Totally That Great

October 05, 2012
I've been meaning to read The Lifted Veil by George Eliot for a reeeally long time now. And it's super-short, so earlier this week, I was like "Oh, just do it."

It's kind of weird that this was published the same year as Adam Bede, because I overall like Adam Bede and its fanfic-like ways, whereas this I was like -- well here, let me ruin it for you: So it's all first person narration, and it's this guy who's like:

"Oh, I'm dying, but LET ME TELL YOU MY TALE. I got sick when I was young and afterwards I could read minds. Yes. Totally. I am not shitting you. But it was really annoying because ugh, people are dumb. And I had to hear all these dumb people's dumb thoughts. So I'm living life, trying to be a poet but somehow sucking at it, and then I couldn't read this one girl's mind, so she was FASCINATING, and hold up, I know this sounds like Twilight except for the vampire bit (although I was stunningly pale), but then we got married and then I totally COULD read her mind, but she turned out to be super-mean, and then something weird happened with her maid and we separated and now I'm going to die The End."

The beginning is SO LAME. I'm just gonna steal from Alley and post my Kindle notes:

I had a tender mother: even now, after the dreary lapse of long years, a slight trace of sensation accompanies the remembrance of her caress as she held me on her knee--her arms round my little body, her cheek pressed on mine. (This is the most Victorian thing that ever Victorianed. Georgey, what're you doing?)

A better-constituted boy would certainly have profited under my intelligent tutors, with their scientific apparatus; and would, doubtless, have found the phenomena of electricity and magnetism as fascinating as I was, every Thursday, assured they were. (haha Ok. Good one.)

My least solitary moments were those in which I pushed off in my boat, at evening, towards the centre of the lake; it seemed to me that the sky, and the glowing mountain-tops, and the wide blue water, surrounded me with a cherishing love such as no human face had shed on me since my mother's love had vanished out of my life. (OMG HIGHLIGHT ALL THE THINGS. This guy's such a pussy. If he lived today, he'd listen to Bright Eyes and wear eyeliner)

She was keen, sarcastic, unimaginative, prematurely cynical, remaining critical and unmoved in the most impressive scenes, inclined to dissect all my favourite poems, and especially contemptous towards the German lyrics which were my pet literature at that time. ("BELLA LET ME READ YOU SOME OF THIS GERMAN POETRY." "Ugh, let's just make out, Edward.")

To Bella (whose name in this is Bertha, which is TREMENDOUS name-fail): "You scorn to wear my poor opal. I should have remembered that you despised poetic natures, and should have given you coral, or turquoise, or some other opaque unresponsive stone." ("Some other opaque unresponsive stone"? If someone said that to me I'd be like "Hahahahaha Turquoise is pretty, fuck off.")

I have way too many notes. And it's unfortunate, because the second half is WAY better than the first half, but my notes for THAT are like "Oh, yeah, that's a good point". But when he's a student in Switzerland, being like Prince Herbert in Holy Grail 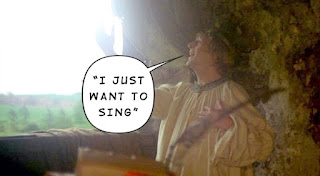 he's the most annoying character I've dealt with. But then Eliot starts getting into humanity in general, and how it would suck to know what everyone was thinking and be able to see into the future, and have there be no mystery to life (hence the title), and THEN it's pretty good. There's also some stuff with Science, because 1859.


Also there's a weirdass addendum which I'm gonna spoil right now, so READ NO FURTHER if you don't want this veil lifted, but it's like George suddenly went "Oh, I have to end the story. Ok. Let's make it DRAMATIC," so she brings in this lesbian maid and then the maid's suddenly dying, and the narrator's doctor friend is staying with them and he JUST HAPPENS to have these frickin' tube things and he's like "Hey, look, she's gonna die, and after she's dead, I wanna insert these tubes into her arteries and pump my blood in there to see if we can bring her back, ok? Oh, and don't tell your wife. That'd be weird."

AND THEN THEY DO THAT. Like, who carries artery tube things with them? That guy. So all of a sudden, the narrator's like "Oh, there was a teeerrible secret between my wife and her maid, but I didn't really care what it was," and I was like "...you mean...."

But no, so the maid dies, and the wife's like, phew, and she leaves the room, and then the doctor does his awkward blood...tube...thing, and gasp! She's alive again! And for EXTRA-drama, the wife comes back in the room, and the maid's like "YOU WERE GOING TO POISON YOUR HUSBAND" and then she dies again. How convenient. And then they separate and he goes off to die. The end.

I did like "The narrow room of this woman's soul" when talking about Bertha (ha...Bertha. so terrible.). And she uses 'blent' as a past tense of 'to blend' and apparently that's correct, so ok. YOU GOT SO MUCH BETTER LATER ON, GEORGEY. But there's some stuff in here that's still pretty awesome. And I still love you.