Look at That, Not Even a Humorous David Tennant GIF

November 21, 2011
MY RESTRAINT, LET ME SHOW YOU IT. Because Doctor Who minisodes have been uploaded to youtube, fresh from the UK (the DVDs don't come out here until tomorrow) and let me tell you, the teenage girls on tumblr have been expressive about their feelings. Personally, I've just been rather twitchy and excited, but I still want to post gifs from the episodes everywhere and SHALL NOT, as this is a book blog and has nothing to do with Doctor Who, thankyouverymuch.
Except for that dream I had the other night where Alex Kingston asked if I wanted her to read aloud from Sophie's Choice and I went "OMGYES" and then she did and it was awesome.
I'm going to pick nine books from my Extremely Lengthy TBR List on goodreads and post them here, and if any of them suck I want you to let me know, yes? Very cool. Okay:
A Great and Terrible Beauty, Libba Bray - I read Beauty Queens, and unlike some snobby snobs out there, highly enjoyed it. Or really enjoyed it. Maybe the latter. But what I most like is her sense of humor, and I sense this is somewhat humorless? So I am trepidatious? (I have been informed by some sources that 'trepidatious' is not a word, but I defy them all)
The Book Thief, Markus Zusak - People rave about this to a degree I find frightening. Is it going to make me all sad about the Holocaust?
My Cousin Rachel, Daphne du Maurier - I'm actually a bit 'eh' on Rebecca, but I find myself liking du Maurier anyway. So there's this. Which is possibly good.
Liberating Paris, Linda Bloodworth Thomason - THIS IS BY THE LADY WHO CREATED DESIGNING WOMEN. It is the only reason I have it on there. Because Designing Women is wonderful and amazing and I will marathon episodes with ANY OF YOU if you're ever in town.
The Book of Lost Things, John Connolly - After reading The Gates, I was ready to marry John Connolly, because really, if you're funny I'm yours, but IS this funny? Do I ask that question too much? Perhaps. BUT I MUST KNOW. I mean, I can handle The Serious, but I do not prefer it.
The Lost City of Z, David Grann - I saw something about this on History's Mysteries, and since The History Channel is such a non-sensationalistic, generally accurate historical resource (read: ALL THESE THINGS ARE FALSE), I guess I could consider my research done, but JUST in case, there's always this book. 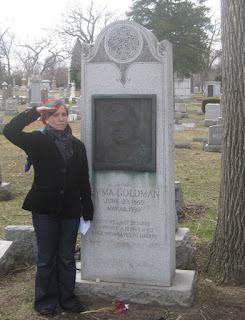 Love, Anarchy, and Emma Goldman, Candace Falk - Last March/April I went through a bit of an Emma Goldman phase. And then I found out she's buried in the outskirts of Chicago and dragged Julie there and made her take this picture of me (note the Soviet headscarf even though Goldman was, in the end, opposed to the Soviets' way of ruling).

I want to note that my mother had this picture laminated. I don't know why she didn't want to frame it, but it's sitting by the phone on her front porch.

To avoid awkwardness, no, it was not meant (completely) seriously.

If You Have to Cry, Go Outside, Kelly Cutrone - I think I just want someone to yell at me, and this promises to do so.

Chime, Franny Billingsley - What up, internet? There seems to be some controversy around this, although I guess it's more because of the horrible thing that happened to Lauren Myracle at the National Book Awards. But what do I know? Maybe this book's all crazy-controversial in and of itself (although it seems like Shine's the more likely candidate there).