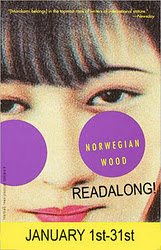 So, after some panicking on my part, and the over-taxed Chicago Public Library taking weeks and weeks to send my copy (it's been in transit for about three or four weeks now), I finally caved and bought it on Kindle (even though the Kindle price is more than the paperback -- COME ON PUBLISHERS).
Tuesdays worked well last time, because then you get to panic on Mondays and not Sundays that you haven't done the reading. Makes the weekend more relaxing. But if people want to do Wednesdays instead because of Top Ten Tuesday being such a big meme, let me know and I'll shift everything forward a day (except the 31st, because I REFUSE TO GO INTO JANUARY). Here's the schedule:
January 3rd: Intro posts. How do you feel about Murakami/have you read anything of his before/whatever you want to say; I am merely your faciliator.
January 10th: Chapters 1 through 4
January 17th: Chapters 5 & 6
January 24th: Chapters 7 through 9
January 31st: Chapters 10 & 11
If you want to read ahead, obviously, do it -- we're stretching a 300 page book over a month. But we're probably all going to be reading other things, so no huge assignments -- this is considerably denser than The Help (thank God).
In honor of the last readalong, here's Hilly weeping over her toilet yard (see how much fun we have?):