December 27, 2011
Excuse me while I pause from my frantic attempt to finish three books in the next five days (do we all remember how long Sophie's Choice took? yeah, this is something of a Quixotean quest for me).
But look at the book-related stuff I got!: 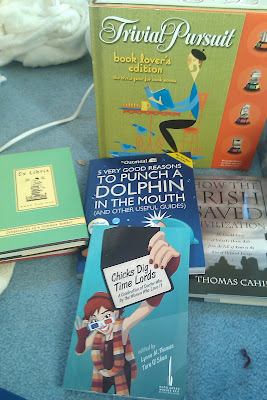 Ok, so two of those I asked for (thank you, Rayna at Libereading, for recommending Ex Libris), but the ones in the center were given to me by my oldest brother. I got a shitload of Doctor Who-related items this Christmas — SO SURPRISING — and Chicks Dig Timelords is a collection of DW-related feminist essays. Daaaaamn. And, of course, 5 Very Good Reasons to Punch a Dolphin in the Mouth is a collection of comics by The Oatmeal.
I obviously wish you all lived near me so we could play Book Lover's Trivial Pursuit.
Now. Nabokov. I've maligned him somewhat in the past week, but Speak, Memory is actually really good and you all should kind of maybe sorta read it.  That's as strong a recommendation as I'm going to give him, because I'm still bitter about all the other books of his I had to read. But reading his sort-of-autobiography-but-more-an-exercise-in-memory makes his work more understandable.
Also, dude was INTO butterflies. Which — brief language aside — did you know that the French for butterfly is 'papillon', which sounds nice and fluttery, and the German is "Schmetterling" which sounds like an elephantine creature that thunders around a dark forest?
You know how we talked about how he's careful with Every Single Word he chooses, and it's kind of annoying because then you have to pay extra attention since it is all important or at least he thinks it is? Yeah, so, sometimes that pays off and you get descriptions like this of when he was about 16 and started writing poetry:

A moment later my first poem began. What touched it off? I think I know. Without any wind blowing, the sheer weight of a raindrop, shining in parasitic luxury on a cordate leaf, caused its tip to dip, and what looked like a globule of quicksilver performed a sudden glissando down the center vein, and then, having shed its bright load, the relieved leaf unbent.

PARASITIC LUXURY ON A CORDATE LEAF. GOOD LORD. I can't even handle that sentence.
You all have a swell Christmas? I do indeed hope so. Other people don't seem to be posting photos of their books, so PLEASE DO SO.
I leave you with this: