Wherein We Discover That Some Opera Scholars Are Dumb

December 29, 2011
Oh man, you thought I wasn't going to update today, but you were WRONG. Because my friend Hannah and I started setting up our January/February book club and I now have to talk about it.
I believe one day a month or so ago, Hannah and I essentially said "We don't know enough about German history. Let's read somethin'." For me, this was motivated by reading Sophie's Choice and it's like "Yeah, the Nazis were the clearest modern depiction of evil, but WHY were they that way whyyyyyyy?"
So we found a book called Iron Kingdom: The Rise and Downfall of Prussia, 1600-1947. And we formed what Hannah has dubbed 'Alice & Hannah's Book Club of Super Fun.' WHICH IS THE BEST NAME EVER. Aren't you just automatically like 'Bam! I want to join that book club. But I can't, because I am not Alice or Hannah.' *sadface*
In other news, I have two and a half days to finish my 2011 TBR Challenge (link to Adam's blog found on the right if you're reading this on my blog instead of on Google Reader like a suckah). I just started Understanding the Women of Mozart's Operas, and I'm like halfway through State by State: A Panoramic Portrait of America. I keep telling myself I can do this. I CAN DO THIS.
Understanding is actually really kickass so far. So, in Don Giovanni, the titular character (eponymous hero? nah, he's not a hero) is Don Juan, but Italianified. And at the very beginning, he breaks into this noblewoman Donna Anna's bedroom and either rapes or TRIES to rape her. She comes on stage struggling with him and swearing vengeance and all that, and her father comes out to defend her honor and Don Giovanni kills him.
One of the goals of the book I'm reading is to eliminate centuries of critical interpretation and look back at the source text. Also to help the reputations of Mozart's ladies, because a lot get accused of not cool things that are MAYBE not textually supported. Complit majors: We Like Textual Support.
So one of the critics of Donna Anna said -- in 1977 -- "All men, to her, are beasts, and it would be beneficial to her personal growing-up if she had been pleasantly raped by Don Juan."
I KNOW RIGHT. That was William Mann. Everyone hate on him.
People also say that she was sekritly in love with Don Giovanni because rather than wanting to discuss marriage with her fiance, she's focused on vengeance against her unknown attacker. I love that they're completely ignoring that SHE WAS SEXUALLY ASSAULTED AND THEN WATCHED HER FATHER GET KILLED BY THE MAN WHO ASSAULTED HER.
People are idiots. 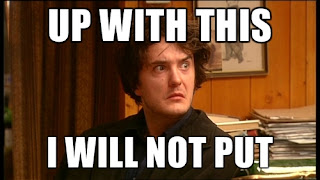