I Took a Two and a Half Hour Nap and Am Now Updating My Blog. As Befits a Winner of Life.

January 07, 2012
You guys kick ass. When my friend wrote her "Suggest things for me to read" post on facebook, I got to be all smug and think 'Oh, you want book suggestions? Let me ask the HORDE OF EDUCATED PEOPLE I HAVE ACCESS TO.' And you all recommended things that made me proud to be your fellow book blogger. *wipes away tear*
Now. Europa Books at State and Chicago. Do you know how much French lit they have? THIS MUCH: 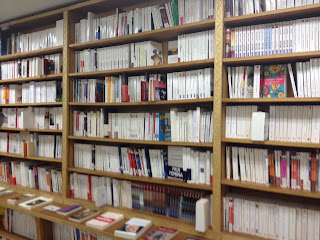 They're all new. Omg. I cannot even. The only French books I own that are new and therefore weren't purchased from some weirdass independent used bookstore were either for a class, or given to me by people traveling back from France. So most of mine are kind of beaten up. And the foreign language pickings at weirdo used bookstores? They are slim. Meaning you'll find like five copies of Le Mariage de Figaro and then some random translations of Stephen King. But THIS. THIS place has Balzac and Zola and de Beauvoir and ERIC-EMMANUEL SCHMITT and Sand and basically everyone awesome. It's also all hugely expensive, which makes me a sad panda. But SOMEDAY. Someday I will go and buy something of George Sand's other than Indiana, and I will read it and go "GEORGE SAND I WANT TO SMUSH YOUR FACE. IN AN AFFECTIONATE WAY."
Your quote for today from Rats, Lice and History is "Among the adages and proverbs which tend to become the philosophy of the thoughtless, one of the most dangerous is: 'Seeing is believing.'"
The end.