Top Ten Tuesday: Wherein This Year Shall Be Awesome 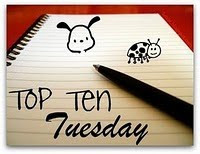 All right, for those not participating in the readalong, I'm posting this (lies! I just really wanted to do this Top Ten Tuesday). Also, ARE YOU WATCHING SHERLOCK? Because the new series premiered in the UK on Sunday and OMG it has Irene Adler and I watched the new episode twice yesterday. Damn, people.
Oh right, Top Ten Tuesday, hosted by The Broke and the Bookish. The topic this week is Top Ten Books I'm Excited to Read in 2012. I have this whole year mapped out already, so here we go:
1. The Iron Kingdom - My readalong book with my friend Hannah for Jan/Feb. I read like three nonfiction books last year, which is UNACCEPTABLE. We shall learn about Prussia and it shall be glorious.
2. A Doll's House - The completely awesome actress Janet McTeer was in a production of this (no, I didn't see it) and ever since then, I've wanted to read it. Plus people reference it a LOT, so cultural..help. With reading it. It'll be useful for that is what I'm saying.
3. Barnaby Rudge: A Tale of the Riots of '80 - So, the story with Dickens and me is that back when he was my #1 Homeboy, I went through a bunch of his books. And then I said "Whoawhoawhoa, self. He's not writin' no more. So you calm that down and read ONE of his books per year." And I'm kind of big on doing things chronologically, so I started with Pickwick Papers and last year was The Old Curiosity Shop. I ended up loving The Old Curiosity Shop, so hopefully Barnaby Rudge doesn't suck.
4. Cranford - I started this last year and liked it mightily. I'm not a big fan of North and South, but maybe when NOT working off an Austenian template, Gaskell's way better.
5. The Crimson Petal and the White - I got this last year and still haven't read it but I SO WANT TO but it's GIANT and I never seem to have time. It will be read this year, and I am 98% sure I'll love it. Postmodernism! 19th centuryness! A miniseries starring Romola Garai! I ask for no more.
6. The Grapes of Wrath - Everyone knows that East of Eden is one of the Best Novels of All Time, and I say that without my usual I'm-saying-this-but-don't-really-mean-it hyperbole. No, it for reals is. So I'm assuming Grapes of Wrath is at least half as decent, because GIANT STEINBECK NOVEL.
7. Prep - I don't know why I'm looking forward to this so much, but I really, really am.
8. Rules of Civility - Okay, confession, I don't have this on my schedule until December, but I started it this morning and I LIKE IT SO MUCH I'm going to keep reading it. Oops. My spreadsheet for 2012 reading has been carefully weighted for each month with happy/depressing books. This throws a wrench into the works. But you know what?

9. Notre Dame de Paris - This was assigned for my Hugo/Balzac class in 2007. I never finished it, because UNABRIDGED HUGO IN FRENCH. But I need -- NEED -- to finish it, and that will happen this year. YOU SHALL MOCK ME NO MORE, DEAD MAN. (i have some animosity towards Hugo)
10. Notes on a Scandal - I love this movie. It is swell. I expect the book to be at least equally swell.