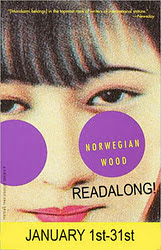 Well well well. Here we are. And I'll bet you're all expecting a huuuuuge dose of vitriol from me, but I SHALL NOT RENDER IT FORTH. Or something.
Because while I might have wanted to shout praises when I realized I'd finally read the last words of the novel, I will not say that it is a bad book. It is a book, however, remarkably not for me.
First off, though, let's hit some of the good stuff of these last two chapters. One: did anyone listen to the first song Reiko plays in memory of Naoko? 'Dear Heart'? Because it is FANTASTIC.
And the lyrics are just kind of heartbreaking in the context of the book.

Two: "'Naoko was choosing death all along.'" YES. What an excellent observation, Book. This explains all her choices and attitudes. Too bad it happened like five pages from the end.

Three: Telling Midori she shouldn't change anything about herself? Awwwwwww. I will FULLY admit that a lot of the reason I hated this book is because every character acted like an ex-boyfriend who was constantly emo and constantly telling me things to change about myself. So that right there? Made me a MUCH bigger fan of Toru.

It was as if I were writing letters to hold together the pieces of my crumbling life.

sorrow itself would envelop me in deep darkness until the tears came.

One windy evening, as I lay wrapped in my sleeping bag, weeping

In woods as dark as the depths of her own heart, she hanged herself.

No no no. Remember that drunken parlor maid thing from yesterday? THAT'S what I want. Not sorrow enveloping people in deep darkness and weeping in sleeping bags. I acknowledge that this sort of thing exists, and for people who want to read about it, it is swell that this book is here. But I am not one of those people. OH, and I wanted to point out that while at first, I was NOT down with Midori completely ignoring Toru when he was depressed and needed someone, it was probably a much needed wake-up call. Anyway, Murakami, I might try you again in ten years, but not before that.
Oh yeah, check out Paperback Girl's breakdown of a Murakami novel. Murakami posted it in facebook, so, y'know.

The Woman in White this April. It'll be our best readalong yet, people.