January 24, 2012
What does 'wind my spring' mean?
I assumed it was 'wind my watch' but then why wouldn't you just say 'wind my watch'? And why not on Sundays? And that actually doesn't make sense with the context it's in, so WHAT DOES IT MEAN?
I am NOT feeling this book. Just...not. I'm gonna be really, really glad when it's done, and then guess what's probably happening! Unless someone links me to another blog that's doing it and that one looks equally as fun! Woman in White Readalong. April. For some reason, everyone has this on their TBR list for this year, so let's just do it and be delighted by Wilkie Collins.
Toru kind of seems like this clay that gets refashioned by whichever character he's with. Which irritates me a whole lot. Whoever he's hanging out with, he'll adapt to their way of life, meaning he feels like an empty character, and yes, this is of course on purpose and it Says Something about how he's dealing with his friend's death, but it doesn't do it for me. He does retain his personality, and sometimes he feebly tries to fight back against what the person he's with is doing, but he always fails. And lines like "I stretched out in bed and stared at my calendar as dark feelings came over me"? You've read my blog. Does that seem like my jam? THAT IS NOT MY JAM.
I did enjoy "my room had the chill of an aquarium" and him talking about getting "an egg sandwich and a Coke." Whenever anyone adds "and a Coke" to their food order, I instantly think their order sounds delicious. Because I don't like egg sandwiches, but damn. Coca-Cola is a fine beverage. The height of this for me, is Blues Brothers when they order "four fried chickens and a Coke." "And some dry white toast." I will eat that someday. By which I mean I will eat a quarter of a chicken. And some toast and a Coke. Mmmm. 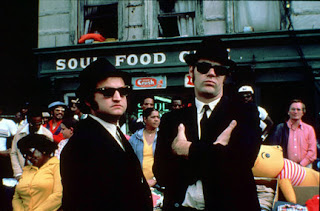 I took a fanfic break in the middle of the reading this morning and read about the Doctor and River Song gettin' busy in the TARDIS while she's wearing a catsuit. That was pretty damn great.
61 more pages for next week and we're done. DONE!
edit: Laura's post has made me think that I was perhaps interpreting the winding spring thing a bit too literally. PERHAPS.