I'd Make an Obstetrics Joke, But I Don't Know Any

January 19, 2012
Er...so I rather unexpectedly won a ten volume set of Poe from Forgotten Bookmarks. He does giveaways pretty often, and they tend to be old books (i.e. nice for one's shelves). This is the second giveaway I've won in like a month (the other was from Laura at The Scarlet Letter). I shall stop entering for a time, as clearly the Giveaway Gods have marked me as The Chosen One, and it's not fair to everyone else.
You know how I made my Excel spreadsheet about what I was going to read this year, and how I wasn't going to go to the library and check out books just to have new books and would finally clear out some of my shelves? Yeah, no. No, that's not happening.
But check out this book that looks kind of popular and crappy, but I shall explain why it might not be!: 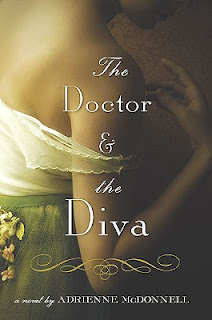 As an opera singer, I'd like to say that I hate the word 'diva.' Not just because of its prior-to-the-'80s connotation of someone who's difficult to deal with -- I could handle that -- but because it's been appropriated by pop singers, and this irritates me. Anyone who can screech up to a C and walk with some kind of attitude is labeled a diva. And then there's the actual meaning of the word, which is essentially 'goddess' (see 'divine' and 'Dio'). I'm a proponent of the American opera singer (obviously) and we've developed more of an image as the easygoing, down-to-earth, nice singers, thereby rather eschewing this nasty stereotype, thank God.
That being said, I was scanning the shelves of the Harold Washington Popular Library last night, and The Doctor and the Diva? Of COURSE I'm going to pick that up. I skimmed the plot and it said it was set in 1903 (score, because current favorite time period) in America (I can deal with that) and about an opera singer whose husband desperately wanted children, and the entrance into their lives of a young dashing obstetrician.
I read the first ten pages on the El, and yeah, ok. Her name is Erika, which feels SLIGHTLY weird for the time period, but fine, and she's a mezzo, which has made me instantly fall in love with her (mezzos, I love you all, let's get married). For those unaware, mezzo-sopranos are the lower range on the vocal scale, and tend to play "witches, bitches and boys." Basically, if you're a mezzo you're probably not going to get the guy. But you do on occasion get the girl. What with the whole playing a boy thing.
She seems a bit fed-up with her husband, and I expect tomfoolery and shenanigans with the handsome doctor. Whose last name is Ravell. RAVELL. I feel like I'm reading a romance novel. I probably am. But with opera!
The writing is decent enough; Amazon calls it "book-club friendly," which makes me cringe, but ok. I am, of course, only ten pages in, so maybe it gets completely terrible or swooningly terrific. We shall see.
And let's end with a quote from Tolstoy and the Purple Chair, which I was still enjoying. This is ACCURATE, yo:

The giver of the book is not exactly ripping open her soul for a free look, but when she hands over the book with the comment that it is one of her favorites, such an admission is very close to the baring of the soul. We are what we love to read, and when we admit to loving a book, we admit that the book represents some aspect of ourselves truly

She later essentially says "When a friend lends a book to you, or recommends one, and you don't like it, don't shit all over it. Because that's not cool." Agreed.