April 11, 2012
A while back, I was reading a book called The Celtic Realms. Unfortunately, it seems to assume the person reading it has some kind of a background in Celtic studies. I do not, of course, so instead of reading about fun Druid sacrifice things (I don't care if that's inaccurate; it's automatically what I think of) there're sections like:

The fortifications have been classified in two main categories: first the great hill-top fortifications of Celtic Iron Age A; and second the Belgic-type fortresses of later pattern but sometimes in contemporary use with the first type.

Let's try to tackle that, yes? The Iron Age in the British Isles, according to Wikipedia, was from the 5th century BC to 400 AD. Okay. Now what on earth is Belgic? My obvious first thought was having to do with Belgium, but why would the Celts build fortresses in the style of Belgians? Especially since Belgium didn't exist then. Ah-ha, but Wikipedia again has the answer. Belgium was named for the Belgae, and the *Belgae* were a Celtic group. It's all comin' together now. As for "Iron Age A"...apparently the Iron Age is divided into letters, and if you're reading a book on "The History and the Culture of the Celtic Peoples from Pre-History to the Norman Invasion," apparently they expect you to know this. I just thought the cover looked cool. 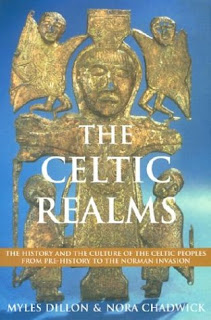