The Woman in White: Mice, Pocket-Axes and Very Fat Men 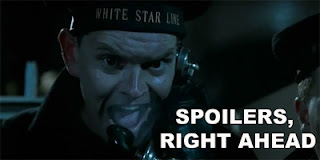 So, I skimmed the last 50 pages of the reading (if you haven't read the four pages or so past what I idiotically assigned, you should, because REVELATION), because I'm behind and I have to go to bed. But I THOROUGHLY read the rest. Let's dive right into week 2 (or 3, depending on if you count How Large Is Wilkie's Forehead week).
WHAT HAPPENED? So much happened. SO MUCH. No one likes Sir Percival, but they can't figure out why, then Laura's all "I shall forswear my love, because that is accurate to the duties of the time period, and therefore let Fate do with me what it will!" So she marries Sir Percival Glyde (ewwww his name) and Marian's all "Noooooo!" even though it's pretty much her fault (more Mr. Fairlie's, but let's ignore him), and then they skip six months, which I WAS NOT EXPECTING and she's like "Yeah, nothing really happened during those months," so I guess I'm glad she skipped them, but STILL, and then she moves to Blackwater, the worst named house ever.
So things get interesting then, right? Laura stops being all meek, and the obvious stand-out from the cast shows up, the amazing Count Fosco and his tiny mice. Wilkie knew what he was on about. He hung around the theatah. "How can I make an interesting characte — hah, I don't need to ask you. Small mice, big fat guy, colorful waistcoats. Memorable." There's stuff with Anne Catherick, Laura steps up as a character, Marian is worried ALL THE TIME but is also diggin' Count Fosco while being kind of gay about her half-sister (THAT'S RIGHT I JUST RUINED VICTORIAN ROMANTIC FRIENDSHIPS).

And then Sir Percival tries to steal all of Laura's money. Which the annotations inform me is his anyway and Wilkie somehow didn't realize that British dudes always got their wives' money until like 1882. What's up, Wilkie?

Ok, so onto the minute points, which are what I really care about. I like Laura now, because strangely enough, when she's described by someone who's not claiming an ardent passion for her, she's way more interesting and seems like a person. The fact that she hides the music she played for Hartright? LOVED. So angsty. So great. And when she throws down the pen and refuses to sign? Yesssss.
Marian is adorable and awesome and hilarious (more so in Hartright's section, as this part has all been Very Dramatic and Angsty) and sooo Victorian. And she says awesome things like "More discoveries in the inexhaustible mine of Sir Percival's virtues." And the DOG. She made a hammock out of her skirt and carried the wounded dog all the way back to the house! Mariaaaaaan!

She ALSO says things like "What is the trifling mortification of my pride compared to the dreadful sacrifice of your happiness?" Why don't we talk like that now, damnit.
I kept taking notes throughout the section about how the scenes with Laura and Marian could NOT have been written by Dickens. And I mean...they couldn't. It's completely refreshing to read scenes of genuine emotional depth that aren't just written to make a Victorian audience cry, but rather to show true friendship and the humanity of the characters. When Dickens has two young women cry, you know somewhere he's thinking 'What a pretty picture this is.' The scene with Laura and Marian in the boathouse when Marian turns insensible upon realizing what her actions have cost the person dearest to her is fantastic. Just her staring ahead in shock far surpasses what Dickens does with his female characters, with the POSSIBLE exception of Esther Summerson in Bleak House (but even Esther's a bit too good to be true much of the time).
Marian's fever dream. How about that. AND I find it completely awesome that the South is portrayed as cheerless compared to the comforting North. Like "Oh, I miss the enlivening moors." Who else has ever said that? No one. I love this book.
Oh, p.s., Sir Percival has a pocket-axe. What? And not that I was looking, but NC-17 fanfic DOES exist for this book. Yeah. That.