April 25, 2012
I seem to now have a chest cold, and my best friend told me there's this thing called an expectorant, which automatically made me think of this: 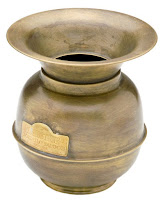 Fun story that might be made up, the 1918 influenza outbreak caused spittoons to decline tremendously in popularity. And then apparently everyone started chewing gum (and then sticking it under things, because then the germs are hiding and can't gitcha).
The Woman in White readalong is almost done (next Monday!), and of course my mind is already in end-of-summer-camp mode and going "WE NEED TO PREPARE FOR NEXT YEAR CAMP BUDDIES." Only by next year, I mean like July.
I was thinking The Monk, because it's the greatest book of all time (ok, I've read 20% of it -- thanks Kindle! -- but that 20% is the greatest book of all time). But then, I don't know how many people have already read it and don't want to read it again. But HOW could you not want to read it again? It has demon nuns. And all sorts of things that make you go

But then eventually you kind of ARE expecting it, because everything is contained in that book.
The Monk in July?
p.s. OH YEAH, this one has actual potential ghosts in it. And deflowering of people. And general Gothic overdoneness. SO GOOD.